Not all green products are created equal: What was I thinking? 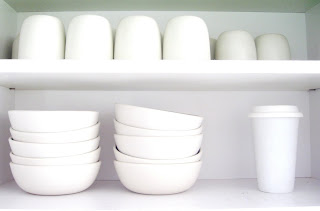 When you start greening your life, one of the first items on your shopping list of reusables is, a travel cup. So, a few years ago, I decided that I needed to have one to carry around my green tea.

But, I was not going to let just ANY cup showcase itself on my bare shelf though.

So I shopped around. Back then, it seemed that options were mainly restricted to stainless (which makes sense if it is completely constructed of stainless, for its lightweight and insulating capabilities). But all those I found had too much going on: A large obstructive handle, or an (advertising) logo, or a plastic interior (???), or a leaking top or/and bottom…

I was determined not to settle for less and would share my husband’s until the right option arose. I found his at a thrift shop: steel interior, plain exterior (it had a Starbucks logo but I removed it with steel wool), great insulation, and right price… just an unnecessary large handle. Pretty close to perfection though, for just $1.50. It was worth every penny, especially considering its zero manufacturing footprint (the advantage of buying used). Too bad, it did not come with a twin (the disadvantage of buying used).

While I kept on searching, I visited the San Francisco Green Festival. And there, amidst the “granola” filled aisles, I found it: The “I am not a paper cup” (a cup with a name!). Boy did it stand out. It seemed that this object answered all my prayers. Its reusability, its ceramic and silicone material (a change from the usual stainless), its white and clean design, and its reference to modern art, a bonus! (Its name is a take on Magritte’s surrealist piece entitled “Ceci n’est pas une pipe”). In our home, where we choose to live minimally and only surround ourselves with objects that we love and that fit the décor, this cup was all I wanted in a cup.

Who knew that a simple ceramic piece could sum up our house so beautifully!

I had fallen in love with, a cup… but not its packaging: An unrecyclable clear plastic box on a cardboard stand evidently simulating that of a museum art display case. So I bought the shelf sample and welcomed it into my white house.

Gosh, did it look pretty on my cupboard shelf, a piece of art.

The next day, I was meeting some friends for a hike. Time had come to take my warm cup of tea for a walk and Zizou (my dog) too. On my way to meet them, I crossed a couple of trendy looking women, paper cup in one hand, an oversized purse in the other. And it dawned on me…

Instead of being an example of green living, was my new acquisition supporting the paper cup as a fashion accessory? Was I trying to emulate one of the stars mentioned in the Foxnews article "Hollywood’s Hottest Accessory: The Big Coffee Cup"? “The venti embodies everything about the American lifestyle,” Yanoshik said. “Not only is it trendy, but it’s big and out there. People take notice of it.”

What was I thinking going out with this in my hand! I don’t even have the purse to go with it ;). Had I purchased the ultimate wannabe accessory?

And just like that, the object that I had so much loved for one day became one that I despised. I had fallen into the trap of purchasing a sustainable product carrying a contradictory message.

Sadly, it seems that in a world where fashion is so ephemeral, the coffee cup has remained the strongest accessory since Starbucks. Only in a disposable and media focused society, driven by excessive consumerism, can such a destructive trend survive…

Last year, D Squared based a whole runway show on the “Olsen-twins chic” (Nicole Phelps called it), a big purse in one hand, the Starbucks in the other (one would think that there would be room in those large purses to carry a travel mug…). Going down the runway with a cup is one thing, but a disposable one? Couldn’t the label have taken this opportunity to come up with its own reusable design and show some environmental compassion?

People magazine is filled with stars sporting the disposable: Do you ever see a reusable one? I have yet to see one (I admit, I look at People magazine once every 3 months at some doctor’s office…but still, I have not particularly noticed a consciousness raising trend from Hollywood’s most watched individuals over the last few years).

I saw a well-known musician at Whole Foods a couple of months ago. I was waiting for the deli counter, struggling with my jar, when I spotted the public figure and watched him fill a paper cup. You would think that someone, who knows that he is being watched, would at least care to be an example and make better eco friendly choices. He even has the power to make “green” cool! Don’t ask me if I said anything to him… I did not and still regret it.

Ironically in this java driven society, and after years of searching (and many new plastic options on the market later...), I still have yet to find the perfect cup.

Although, I confess: Not finding it, has been a minimalist’s blessing… it has given me time to reflect: Do I really need one? Probably not. My favorite way of enjoying a hot tea outside the home, is with my friends at La Coppa anyways. Luckily, Mill Valley is perfect for that with its European style cafes, outdoor sitting, and ceramic cups… I can donate my fake paper cup to the local thrift store, for wannabes in need of "Olson-twins chic", to reuse.

Coffee or Tea anyone?