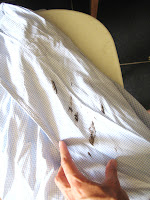 I made a discovery this week. It might not be one for you, but I thought I'd share it just in case.

No matter how much I try to control the kids at my brother's house, mishaps sometimes occur. The boys used a swivel chair, covered with shirts (his house is not quite as organized as mine), to get a view of the Eiffel Tower from a skylight window... Unfortunately, while taking the glimpse, a shirt sleeve got caught in the swivel mechanism and streaked it with black grease.

Stricken by guilt, I decided to repair the problem before my brother came home from work. I googled for a solution and found out that butter, of all things ;) would remove the stain magically. Not having anything to lose, I gave it a try. 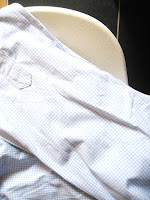 I rubbed some butter into the streaks, and let it sit a few minutes. I then used some dish soap that I found next to the kitchen sink, water, elbow juice and another part of the shirt to rub the stain off. The results were amazing. After a quick rinse, the shirt looked like new.

I later shared my discovery with Scott. Unsurprised, he replied that when living in Santa Barbara, he would remove beach tar from his feet with baby oil.

I had no idea that the phrase would come in so handy a day later...

Saturday evening, the day before my departure for the South of France (where my mom lives), my brother had his sitter of six years come over to watch our four kids, so we could go out for a nice dinner between adults. After giving her instructions to care and feed the kids, we took off. We were enjoying our meal tremendously when my sister-in-law checked her phone and found out with horror that she had 18 new voicemails. Somehow we had not heard it ring, and while we thought our kids were tightly tucked into their beds, the nanny had set the brand new kitchen on fire!

We rushed home to find the kids safe at the neighbor's, but my brother's kitchen looked like a war zone. The sitter had mistakenly turned on the oven, in which my brother stored a fryer (full of cooking oil). When the fryer caught on fire, she grabbed their fish bowl and threw it on the stove, water, pebbles and all (including the poor goldfish). Needless to say, it made things worse. When the firemen arrived, they extinguished the fire, but in the process, also tracked soot, burned oil, and pebbles all over the house and the new hardwood floors.

While my brother drove the sitter back home, I set out to clean the mess, which extended to the upper floors. I first tried a mixture of water and castile soap equivalent, but in vain. The black stuff was too thick and there was too much of it. It is only after 30 minutes of desperate scrubbing, and a call to my brother to recommend the hiring of a restoration expert, that I remembered Scott's words: "Oil removes oil". So I tiptoed into the sticky kitchen, grabbed the first cooking oil and sponge that I could reach and voila! Eight hours later, floors and white kitchen cabinets looked as new as before and the damages not as dramatic.

Considering that the kids and sitter were safe, and that only four cabinet doors and a stove need replacing, we were all lucky. And thanks to the simplicity and handiness of the oil cleaning remedy, my brother and sister-in-law were able to keep their sanity and stay upbeat in dealing with the aftermath of the ordeal. (I forgot to count how many times they said: "This oil trick is amazing! The damages are not that bad after-all.")

Interestingly enough, this fire was not the only one that we survived this summer, but since this is a blog and not a book, you'll have to wait to hear about the other story when the time comes ;).

Do you have a simple and magic pantry revelation to make?